BEFORE anyone can buy a house with a loan from a bank or refinance a mortgage, the lender needs an objective assessment of the property’s value — after all, the home is the bank’s collateral for the loan. Assessing the value is the job of the appraiser. 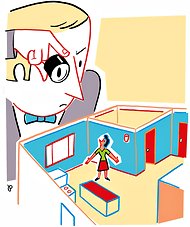 Illustration by Phil Marden for The New York Time

Appraising a home, particularly in New York City, is not simple. Similar apartments just a few blocks from one another can have very different values. The floor that a home is on, the kind of view or light it gets — each factor contributes to its value. The best appraisers are intimately familiar with the neighborhoods they work in.

Jonathan J. Miller, the president of the real estate appraisal firm Miller Samuel, says that with a co-op, he begins by examining the building’s financials: if there is likely to be an increase in maintenance or a special assessment, it might lower the appraisal.

Apartments on higher floors are generally worth more than those on lower floors, particularly when they clear the tops of surrounding buildings, thus affording better views and more privacy, he says. Appraisers record the square footage, the number of bedrooms and bathrooms, and other basics, but they also consider the overall condition, deeming it poor, fair, average or good.

Owners who put in high-end finishes may be disappointed, because “there is no category for superexcellent,” said Roberta Axelrod, the director of residential sales and rentals for Time Equities. While some buyers may be willing to pay more for those finishes, she said, “there is a difference between what the market will perceive as adding value and what an appraiser will determine.”

Once an appraiser has evaluated a home, he or she compares it with similar ones that have sold recently, known as comparables, or “comps.” These should be in the same building, or in one nearby in similar financial condition and with similar maintenance fees, Mr. Miller said. But in Manhattan, similar apartments a few blocks apart can have different values based on proximity to the subway or a park, or whether the building has a doorman or a gym.

In Bedford Stuyvesant, Brooklyn, for example, sales within a few-block radius can range from $250,000, for a dilapidated home. to $1 million for a renovated brownstone with original woodwork, said Sam Heskel, the executive vice president of the appraisal management firm HMS Associates.

Market trends, also a factor in a home’s value, can be hard to pin down, especially if prices in a specific neighborhood rise quickly. Because it can take two or more months from the time a contract is signed on a home to the time appraisers learn of the offer, such fluctuations are not always reflected in the available comps. Appraisers can make what is called a time-adjustment to account for market shifts, but it may be hard to get a lender to accept it, Mr. Heskel said.

The best thing a homeowner or broker can do to help the appraisal process is to prepare a one-page sheet for the appraiser that outlines the changes and repairs that the home has undergone since it was bought, Mr. Miller said.

Given the complexities of New York City real estate, having appraisers familiar with the neighborhoods in which they work is crucial. Unfortunately borrowers don’t always get them. When Shane Koss, a 38-year-old musician, and his wife, Dagmar Kostkova, a 38-year-old farmers’ market coordinator, had their offer accepted on a one-bedroom in Greenpoint, Brooklyn, in February 2012, they didn’t anticipate any problems. Then Mr. Koss received a call from the appraiser. He needed directions to Greenpoint.

The appraisal came in $15,000 under the $400,000 sale price that seller and buyer had agreed on. The loan officer at Quontic Bank suggested that the couple put down $15,000 more, but Mr. Koss and Ms. Kostkova refused. Discussions dragged on as the loan officer tried to get the appraisal amended. George Lazaridis, the president of the mortgage lending division of Quontic, says there is little a bank can do when an appraisal comes in low. Finally, after four months, the couple went to another bank and, with their Quontic loan officer working closely with the new lender to speed the process, closed two weeks later.

These cases have become more common in recent years. In response to the housing crisis, Freddie Mac, the Federal Housing Finance Agency and the New York attorney general’s office created the Home Valuation Code of Conduct, which prohibited loan officers from selecting and communicating with appraisers — a provision that has since become a federal regulation. Now most banks use appraisal management companies, which in turn bid jobs out to appraisers.

Appraisers, brokers and even some lenders say this has only created more problems. David Fuller, the president of the New York State Society of Real Estate Appraisers, says that rather than being paid $400 for evaluating an apartment, an appraiser may receive only $250, with the appraisal management company keeping $150. This has driven experienced professionals out of the business. And the management companies, many of them national operations, have bid out jobs to appraisers unfamiliar with the nuances of New York City real estate.

Allyson Knudsen, a senior vice president for national underwriting of Wells Fargo, says that it uses seven appraisal management companies, including one called Rels Valuation, in which it owns a minority stake. She says appraisers are generally familiar with the markets in which they work. She adds that Rels’s appraisals come in below purchase price about 9 percent of the time, versus an industrywide average of 12 percent.

Yet problems seem to persist. Last summer Alexandra Penfold and her husband decided to refinance their New York City apartment. Though the home is a legal two-bedroom, the appraiser recorded it as a one-bedroom. Even though a similar two-bedroom in the building had just sold for $25,000 more than Ms. Penfold and her husband had paid for their apartment in 2008, the appraisal came back shockingly low — $110,000 less than their original purchase price.

Ms. Penfold notified the bank of the mistake and sent a copy of the offering plan to prove that her apartment had two legal bedrooms. The bank never responded, and she eventually refinanced with another lender.

After researching Ms. Penfold’s refinance application, Amy Bonitatibus, a spokeswoman for the bank, JPMorgan Chase, said, “We fell short in serving this customer and are refunding her fees.”

The best way to challenge an appraisal is to provide evidence as to why it is wrong, be the evidence an offering plan or relevant comps. But that can be an uphill battle. “You have a better chance of winning Powerball than getting a lender to abandon the first appraisal,” Mr. Miller said.